Sfx. Soft Eastern music, sounds of fabric being moved around.

Waheed is talking to his friend Mahdi. 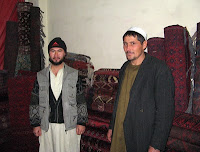 Mahdi : I’ve no idea what you can do. If you don’t pay them, they burn your shop!
Waheed : I know, Mahdi, but everything I own is in these rugs. I lose them, I’m finished!
Mahdi : I know that, but you have no choice…
Waheed : And we can’t depend on those damned Americans to stay, they’re just as likely to pack up and go and then where are we! It’s a madhouse here!
Mahdi : It’s getting worse. And I’m worried about that mongrel Qasem too. He’s been talking to Lutfi.
Waheed : Lutfi? Why would he talk to Lutfi?
Mahdi : Waheed! Lutfi is a beautiful boy, unfortunately. And you know, if he decides to make him a dancing boy, he’ll just take him!
Waheed : (with compassion) Oh, Mahid, that’s terrible. You can’t let them do that! He’ll think he is going to learn dancing but they’ll all fuck him up the arse until he dies or goes mad. He’ll never be the

same!
Mahdi : You’re telling me? You know where I’ve been. I just hope they leave him be and if they don’t I’ll just have to get him out.
Waheed : Well, you know my plan, so don’t forget, I’ll help if I can.
Mahdi : Thanks. I know. But if I were you, I’d pay up and shut up. Complain to nobody and hope it all ends one day and you survive. You shouldn’t even be talking to me about this. They’ve been asking where my girls are too and ….
Karima : (bursting through door in a burqua) Waheed! (trips over something) Damn this stupid buqua! (looks around, sees Mahdi) Oh! Sorry Mahdi, I didn’t see you there through this blasted thing.
Mahdi : What happened. Is Elina OK?
Karima : (Ignoring Mahdi) Waheed! The men are coming. They know about the school! They’ll come here next! I don’t know what to do!
Mahdi : Elina! What about Elina?
Karima (quickly to Mahdi) We sent Elina home. Halina is with them. Don’t worry Mahdi. Waheed! They’re coming, they're coming!
Waheed : (To Mahdi) Can you take over here? I can’t go back to the house with those bastards there but you know where everything is. The plan starts now.
Mahdi : I’ll be all right. Go before they get here. Get a start on them. Have you got money?
Waheed : Not much, just what I took today, a few hundred and the damned passports are in the house. Shit! They’ll find them!
Mahdi : (sounds of coins) Here, take this.
Waheed : Thanks!
Mahdi : And I’ll look for your passports when they’ve gone. You could get lucky. And I’ll sell this up as quickly as I can and send you the money. Hurry.
Waheed and Karima : (departing) Thank you Mahdi! Thank you! Thank you!

Jabar : Where is he? Where’s Waheed?
Mahdi : He isn’t in today. I think he’s up in Kabul buying.
Jabar : When did he say he’ll be back?
Mahdi : Maybe tomorrow, but he asked me to help out for the next day or two.
Jabar : If he turns up here call me. (sound of writing, tearing paper) Here’s my number.
Mahdi : Who will I say you are?
Jabar : (sound of blow) You know me, smartarse! I am Jabar. Tell him Jabar!
Mahdi : (with exaggerated servility) I’ll call you, Jabar, I’ll call.
Taliban : And tell him if the money isn’t ready when I come back, no more shop! (sound of blow) Got it?
Mahdi : (with whimper in voice) Yes Jabar, I’m sure he’ll pay. He will pay.
Jabar : And who are you?
Mahdi : I am Mahdi, son of Farshad.
Jabar : Farshad the happy. Ha ha! ha! Come on!

Continued.
If you want to read the entire play now, go to: http://www.pool.org.au/users/drof_yar
and please leave a comment. Your comments keep the post alive.

Pic 1 A World in Progress.
Pic 2 The Guardian.
Posted by Stafford Ray at 2:46 am