It took two thousand years before the Roman Catholic Church issued a retraction. The Pope admitted that all Jews were not guilty of Deicide. Although St Paul had a bit to say on the matter, it was Melito, the bishop of Sardis, his feast day April Fools Day, who nailed it in 167 AD, giving bigots across the ages an excuse for anti Semitism that peaked with Hitler’s ‘Jewish Solution’ and continues today.

Now we have another idiot, Terry Jones of Gainsville, blaming all Muslims for 9/11. His “Dove World Outreach Centre” (that is really funny) could become the symbol of a new era of religious violence. What does he want? ‘Ethnic cleansing’ of America?

Jewish leaders, Christian leaders, leaders ‘of no faith’ have all denounced ‘Terrible Terry’, and of course, Muslims are outraged. So what can be done to douse the fuse?

Sure, many people are anti Muslim, maybe as many as those who are anti Semitic, anti war, anti any race or religion not their own and some are anti being anti, but there are millions of American Muslims who were as appalled as anyone when Bin Laden’s gang of criminals brought down the Twin Towers, killing thousands of Christians, Jews, Muslims and people of a dozen other faiths.

It had nothing to do with religion but everything to do with resentment growing from US pre-eminence in the world economy. Like the Jewish joke says: “Please God, tell me. If we are your Chosen People, how come the Arabs got the oil?” 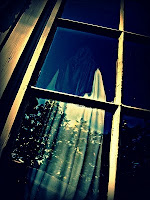 The antidote may be the veiled woman behind the glass. If she is Muslim, her moment has come.
Now, like no other, is the time for American Muslims to yell to the world that Terry Jones and his fifty fevered fools is not America. Muslims must speak to Muslims if this self serving mischief maker is to be negated.

No matter that the US (and her allies) may have gone into Iraq and Afghanistan with the best of intentions; poverty, hopelessness and resentment are being used to polarise huge populations against America. The story they are selling is that Christian America is waging war against Islam and Terry Nobody, hate pedlar of the pulpit has given them the big one. He has insulted their god and when God is under attack, anything goes. Speak up Muslims!

Sorry guys, there is nothing funny here. I had not intended to post this today, but Willow's Magpie Tales arrived a day early in the antipodes and this is urgent!
Posted by Stafford Ray at 6:30 am