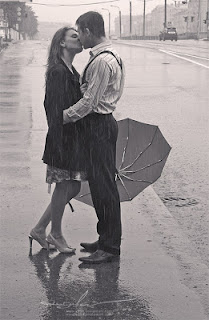 She’s wearing his coat,
She has his umbrella.
What sort of a girl
would do that to her fella?

OK you poets out there, I have a challenge for you.
Write a concluding verse in lieu of a comment. Go on, do it.

Thank you Tess at Magpie Tales for another challenging prompt.
Posted by Stafford Ray at 5:29 am 44 comments:

For him, God was the life force inside every living thing, and he did not place himself above the lowest of creatures in that sense. He certainly looked for ways to help every human being he came across, regardless of all else except their need. He was an exceptional organiser, who pushed others gently and with humour to do better, while always wondering if he was himself doing all he could.

Stories told by his three children gave us a picture of intelligence, wisdom and kindness and a letter he wrote to be read at his funeral left us in no doubt he was not afraid to go, but was content. That is how he will be remembered.

However, the Pastor who conducted the service did not accept Bill’s understanding of God and spent most of his time at the lectern preaching about a god that existed outside the body and mind of Man; a god, who unlike Uncle Bill, did play favourites, and although we are expected to believe he created and loves us all, offers eternal life only to Christians.

When he considered he had us softened up, he delivered the knock-out punch by quoting the words of Jesus as reported by John: “I am the way and the truth and the life. No one comes to the Father except through me.”

For the past few days I have been reading a detective novel in which the ‘heroine’ character spends more time protecting her patch against intrusions from other coppers than seeking evidence to support her case. I guess the Pastor may have wondered why I was smiling as I listened respectfully and noted the parallels. Uncle Bill rests in peace. Some do not.
Posted by Stafford Ray at 6:09 am 32 comments:

Or:
Bring back the Gold Standard.

Four and twenty Blackbirds
Baked in a pie.

If you have no Mo-ney,
Get a printing press.

Soon you’ll have the Coun-try’s
Finance in a mess.


Explanation for those who do not read Roman: The year 1876 marked the start of art on US banknotes. (You will need to turn it over to read the date). Prompted by Tess at Magpie Tales.
Posted by Stafford Ray at 5:51 am 15 comments:

Land of the long lost vowel.

When I was a child it was difficult to pick a Kiwi in our midst. No more. But before I proceed, I must assure everyone, particularly my Kiwi family and the rest of them that this is not intended as a slight in any way. In the year 2000, I flew back from overseas with Air NZ. As is often the case when one comes from an environment that is perceived, or actually is a threat, when one steps aboard the home flight, there is a sigh of relief. The moment an Air NZ hostess smiled a ‘Wilcem aboard’, I felt I was already home.

What seems to have happened is that the short vowel sounds have taken a step to the right, so ‘a’ as in 'apple', as spoken by anyone else in the English speaking world, except perhaps S Africa, becomes ‘e’ as in 'berry'. Then ‘e’ becomes ‘i’ as in 'skittle' and ‘i’ disappears, to become a stop, as in ‘fsh-n-chps’. Now to complete the set, ‘u’ becomes a sort of tortured ‘a’. I am sure NZ-ers are happy with that, but I often have problems understanding our nearest neighbours, who are, I claim, our best friends on the planet. So what happened that pushed their accent so far from the middle?

It seems that we humans are not happy to share an accent with our 'just over the border' neighbours. It could simply be to express a separate identity but I suspect it is for security. We go to great lengths to create almost-impossible-to-mimic differences and there is a good reason based on ‘survival of the fittest’ theory. Of course, we use all sorts of 'in' language; jargon and such which serves the purpose of keeping outsiders guessing and if one does attempt to join in, we can throw a bit of jargon around and smile at each other as we make the outsider look a dill.

So, we start with the premise that NZ-ers as a whole are more closely related to each other genetically than they are to Australians, so if there ever was a war between these two highly competitive but staunchly friendly nations, we and they would be able to distinguish between friend and foe to protect our respective gene pools. So there you have it.

Now, to apply that hypothesis to the many and sometimes way-out accents one finds in Britain, including that spoken by the broadest of Scots, we can assume they have a bloody and conflict ridden history. I seem to remember reading something about the occasional barney in ‘1066 and all That’. But I could be wrong.
Posted by Stafford Ray at 11:56 am 19 comments: 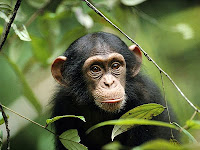 The tragic fact is that human beings are genetically programmed to be religious. That is, to believe things and beings exist for which there is no evidence and to believe certain events happened, even those that have been proven to have not happened.

To believe, despite evidence to the contrary is called Faith. We all have it and will give it expression unless we work at understanding its nature and, particularly at times when we are being threatened, refuse to let is take charge of our emotions and actions. Faith has been useful in Human evolution up until E=MC2. But now, if we are to meet our human-induced challenges of climate change and over-population, we must realise that Faith has passed its ‘use-by-date’ and start acting on fact.

You mentioned a few absurdities in a recent post on Religion, and in the next post presented a fairly detailed account of the progression of your own obsession; that of transforming normal women into sexual angels and acting on that obsession. I suspect both posts are expressions of the same mental process by which we create Faith and they are both examples of how we become prisoners of Faith.

Transformation of normal women to supernatural status was a process of your mind that most of us recognise as 'falling in love'. But for you, and many others, that same process pushed you to act out what, for most of us remain fantasy, outside those 'moral' boundaries we are all taught as children and are expected to maintain as adults. Fortunately for this discussion, we have become accustomed to your confessional style and your determination to let it all hang out. And being accustomed to you means we can get past our own boundaries and experience yours, in my case, without judgement.

In your sexual history post, you documented acting out your sexual fantasies. But like a religious extremist, you did not stop where you worshipped at the altar of your fantasies, but become what could be called a Sexual Terrorist. Your fantasies were so compelling that they needed expression in action and were so strong that you ignored real dangers to yourself and trespassed the boundaries of others as you followed wherever they led.

However, your fantasies were gentle and consensual, unlike religious, racial and political fanatics who are consumed with a fervour that often drives them to murder. We all ask why this schoolgirl was shot when all she was asking for was gender equality, and the answer is as old as God and lies deep within our genetic code. It was her challenge to dogma that incited the response it did, not the essence of her request  and we need to understand that. In a comment on Selma's blog, I sought to answer the question; why there is so much religious (and political) violence now. Of course, world-wide instant media brings every statement made by anyone to the attention of everyone else, so what was said in pre-Internet times was more likely to remain local and not trigger a response. I think my comment (paraphrased) is worth repeating here.

"If you tell me two plus two is five, I can demonstrate your error. I take two coconuts and hand them to you, saying; ‘count them.’ You say: "Two". Then I hand you two more coconuts and say; ‘count them.’ You say: "Two". Then I ask you to count the number you now have. Unless you are a complete idiot, you will concede that two plus two is four and there is no need to hit you over the head with the non-existent fifth coconut to change your mind.

However, in matters of Faith, the rules of evidence change as do our responses. If you claim your ‘imaginary friend in the sky’ is better than my ‘imaginary friend in the sky’, we are at an impasse. Because there is no verifiable evidence with which to demonstrate your 'error', the only way I can stop you from saying it is to kill you." Humans have always done it and we still do. So what do we do about it?

Chimp pic courtesy of National Geographic.
Posted by Stafford Ray at 6:57 am 8 comments:

What are you frightened of? 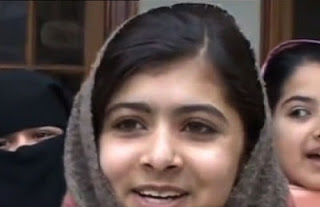 I did not
vilify your prophet

I did not
deny your Allah

I did not
ask for anything

I just want
to be human

And you shot me. 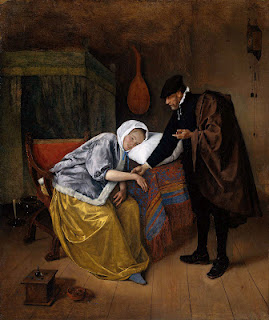 'Your temperature
is very high;
I think it is your liver!'

"I just need sleep,
a place to lie,
to spend some hours supine!"

"My marriage bed
is out of bounds;
it’s otherwise employed."

"My bastard of a
husband has the
maid in there, conjoined!"

Dear Tess,
I hope you learn something from this poor woman's dilemma and at Willow Manor, always have available at least one spare bed!
Posted by Stafford Ray at 5:07 am 26 comments: 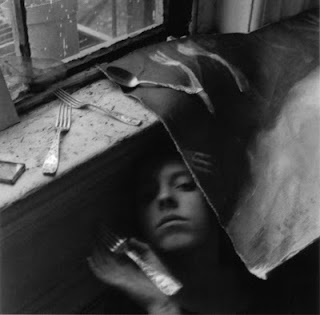 It seems it’s a bad day to day
The demons, no longer at bay;
I see that you’re utterly
Possessed by the cutlery.
The white coats are well on their way.

Pic and challenge from Magpie Tales.
Pop over for more insanity.
Posted by Stafford Ray at 8:56 am 17 comments: