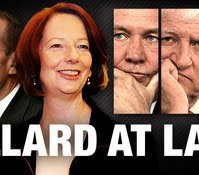 So we have a result of sorts.

A left of centre labor/Greens/Country Independent government that, as Bob Oakshot said, will be ‘ugly in its beauty’. If it works, it will usher in a new era of cooperation for the benefit of the country as a whole. So much reform was negotiated the mind boggles.

Bob Katter, member for mining and sunburn, had little choice but to go with the pro-mining, anti-climate-change-action parties of the right or employ full time security to augment his ‘five locks per door and a gun under every bed’. Miners are good with explosives!

Now we ‘Watch What Happens’. As the song says… “When someone.. Starts believin’ in you..”
In this unlikely coalition I wonder who will blink first! And will ‘Malcolm in the middle’ cross the floor?

I apologise to my friends who are separated from us by oceans. This is basically local politics but as in many political reforms, we in Oz can claim to have been first. So you might like to keep a watching brief and in the meantime, take a look at what your own Green parties are doing.
Pascal’s wager applies here too. Even if you doubt the science, it is more prudent to assume climate change is man-made and fix it than wait until it is too late to act. Major parties cannot take the electoral risk so we must get Greens in.