Magpie thirty-nine and a half.

Gang Rape Most Fowl.
(This piece was resurected and dusted off from Wollombi Tales of long ago). 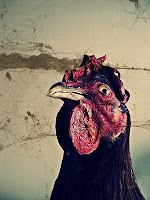 We decided to raise some fowls and bought twenty mixed day-old chicks. But as they grew we realized the mix was nowhere near the fifty-fifty we expected. We had been conned.

Nineteen developed rooster-like features until it was clear we had only one pullet, a ratio of five percent. But we looked on the bright side and planned to dress one a week starting soon. Then our timetable was changed by events beyond our control.

Jim McBeath, my drummer mate and his wife Susan, bought a house at Tascott near Gosford, built a chook pen and populated it with four mature white leghorns hens. All went well until one day that summer, Sue screamed and Jim looked out the window. They were horrified to see a two metre tiger snake slithering across the yard uncomfortably close to their three year old infant. By the time Jim slowed from warp speed at the child’s side, the snake had disappeared under the chook house.

Eric Worrall was alive then, so Jim called him at the Reptile Park and asked what to do. Eric sent a big bearded guy with long hooked length of fencing wire and a chaff bag. After poking around under the shed for ten minutes he had the tiger by the tail, popped him into the bag and offered this advice:

‘You gotta get rid a th’chooks.’

Jim and Sue liked their fowls. Kitchen scraps, transformed into free range eggs, helped feed themselves and four growing boys and they all had names. Fluffy, Muffie, Scruffy and Lucky were loved.

At the gig that Friday, Jim asked if I’d take his hens. Our one pullet hadn’t started to lay, so I happily accepted. And so it was that late Sunday night, four comatose birds were tipped gently from a potato sack onto the chook pen floor and I went to bed.

Monday morning, just as the sky was turning from black to streaky grey all hell broke loose. The cacophony of screeching, crowing and two dogs barking propelled me out of bed, heart hammering, to see who or what was being murdered.

It was a brothel in a goldfield. Lined up behind each of the four old virgins were four or five roosters, crowing, scratching, pecking and raping. The hens were terrified as they were spurred into submission, their genetic preconditioning forcing them to squat, wings out to accept their fate-worse-than-death.

The pullet, still too immature for her smell and antics to be attractive, was running around the fence in bewildered terror when I took a hand, grabbed the bag from where I had dropped it in the dark and stuffed the old girls back inside.

While Sal stoked the fire to boil water, I drove two nails into the chopping block to hold their necks still, rounded up all the cockerels except one and lopped off their heads. In ten minutes there were eighteen white rapists hanging by their toes Italian style from the clothes line. From there they were removed one by one, dipped into boiling water, plucking and dressed. All the good bits like hearts, kidneys and gizzards, collectively the giblets, were kept along with the legs for winter broth.

Laying hens live in a coop,
And peacefully sleep on a roost.
Roosters that raid them
Will soon feel the blade then
And end up as somebody’s soup!

Their criminal 'remains', after having been hung, drawn and frozen, were consumed with gusto and sweet revenge over the following months.

More fowl stories can be found at Magpie Tales.
Posted by Stafford Ray at 6:11 am