Stop the world, I want to stay off.

Listening to John Howard on 7.30 Report reminded me of why he was rejected, but also the reasons for his long reign. My impression? He could make a comeback if he wanted the job. 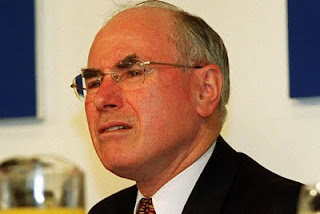 What he had to say about decisiveness was the key. George Bush called him the Man of Iron for good reason and that reason was his willingness to act decisively but basically on intuition. His decisiveness led to our involvement in Iraq, arguably a war crime that resulted in the deaths of hundreds of thousands of innocents. A decisive move by the current government to boost our economy during the GFC by subsiding house insulation led, in a roundabout way, to the accidental deaths of four young installers and a general impression the Government is incompetent. The ‘pink batt debacle’ is continually being revived as evidence of bad government but is never compared to the ‘War crime in Iraq’ debacle.
When asked about Iraq, he restated in his own decisive manner that Iraq was ‘the right decision.’ No argument, no self doubt, no indecisiveness, no discussion. He was not reminded he knew the WMD scare was false, and when talking about refugees, he was not reminded he lied about that to manipulate public opinion. So why do we prefer decisiveness over honesty, thoughtful debate and exploration of options? He knows, as does his acolyte Tony Abbott, that enough of our people so prefer not to be bothered with issues, that we will change our government rather than do the homework.
Our current government, made up of Labor, Greens and Independents has produced a period of negotiated consensus I think has produced needed reform and balanced policies. But it looks messy and that gives the Opposition plenty to attack and attack they do, with hate signs at rallies, blatant lies in outrageous scare campaigns, personal attacks, dishonest insinuations via the Murdock Press, culminating in one politician saying the Prime Minister is evil and should be shot! In the secrecy of the ballot box our true attitudes are expressed. We are returning to jingoism and intolerance as we scurry away from facing facts.
In this ambience, JH again showed that he is still the Man of Iron, with his attitudes to workers, foreigners, refugees and minor parties unchanged and his rewriting of history still evident in his ‘non-core’ memories.
Related short story.
A Returned Soldiers League President, after a 'few too many' was on the microphone.
"Australia is the best bloody country in the world!" (Shouts of encouragement and sporadic clapping).
Voice from the back; "You've been overseas then have yer mate?!"
The President:
"Nah! Fuck 'em!"

Unrelated story (for now).
This morning’s sobering hot-off-the-press investment advice:  ‘buy coal shares!’ Why? India just announced the construction of 147 new coal fired power stations.
What do we think climate change denier and Carbon Tax allergic, T Abbott will do with that!? Sigh!
Posted by Stafford Ray at 8:08 am