You may remember me posting a picture of a willy wagtail that visits me often, flying in through a hatchway, scolding me for a few minutes, then flying off again to return in a few days for a repeat performance. OK, so we suspect he/she wants a hand out.

But yesterday, I heard his/her scolding voice as I walked onto the wharf and saw her/him perched on a trawler, clearly aiming his/her attention at me. Then, he /she followed me along, flitting from boat to boat, continuing his/her admonitions until I climbed aboard.

I made coffee and was just about to take a sip when lo and behold there she/he was in the saloon, perched on the Captain’s Chair, continuing the tirade! 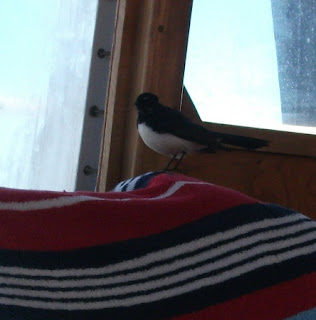 That is him/her perched on my new beach towel draped over the chair, (keeping out the UV's).

I talked back to him/her assuring her/him that I was sorry if he/she thought I had offended him/her. He/she seemed to listen, then flitted off again, delivering a last blast from the companionway before disappearing!

Now, after due consideration, I have decided it is a she so no more he/she. Why?
The similarity of tone and persistence is too reminiscent of one of my wives who had, over the fifteen years of our marriage crafted nagging into an art form, not to be unconnected... I do believe it is her!

Now I will get all soppy and tell you, that although we separated for good reason, I did love her, cried at her funeral for lost opportunities and only a couple of days ago was reminded by 'My Hero' of happier times which erased some of the many regrets that visit my consciousness in the wee small hours.