Run your car on water!

We all learn something new every day. 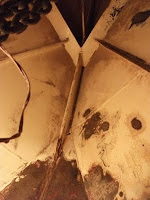 Yesterday I learned that I am getting too old to cramp myself into the chain locker where rust lurks for a whole day without suffering the consequences. But but but…

While checking on stuff I found in your comments on recent 'electric car' posts, I came across two exciting facts that made me forget the twinges.

The first is that Israel’s battery exchange stations charge their batteries on site. Of course! Why didn’t I think of that? Why? Because I was brought up with drilling rigs, the Exxon Valdez, oil refineries and road tankers, not to mention toxic in-ground fuel tanks, all potential disasters and all have been. Damn! In a place like Israel where clouds almost never darken the sky, solar arrays anywhere will do the job and the recharging electrons travel along wires that already exist!

Solar panels don’t catch fire and destroy oceans, don’t sink, spew muck into the skies or crash like petrol tankers. They just sit there, pumping out power. And the added bonus, like in the Super Station concept, battery exchange repositories can be charged when the sun is shining. OK, that’s all fixed so what was the second one?

Did you know that in LA, there are gas (petrol) stations offering Hydrogen? California, that uses 20% of fuel burned in the USA, has embarked on a project to build a ‘Hydrogen Highway’ from BC to LA. That is great news for anyone who buys a Hydrogen/fuel-cell electric car. The advantages of fuel cell cars are range, far greater than a regular car. Emissions are pure H2O and they need little more battery power than the average flashlight. You can even buy a H fuel RR or a Beamer! Too expensive yet for me, but that will change.

Batteries are heavy, chew up rare metals, are expensive, representing about half the cost of the cheapest electric car available, use a lot of energy to manufacture, do not produce full power for more than a few years and can be difficult to dispose of. However, I still had a problem with how to get Hydrogen to distribution points. There is a case for pipelines to power houses and factories. And pipelines do offer the advantage of acting as a windkessel. (don't be lazy, look it up). Pipelines might still get the nod, but Hydrogen powered houses are a long way off if ever. Much easier to go all electric if we can solve the base load power problem.

But I was wrong. LA Hydrogen outlets generate their Hydrogen on site using Hydrolyzers.
Again, no oil wells, no coal mines, no tankers, refineries, or road tankers. Hydrogen generation can happen ‘while the sun is shining’. But they do have Hydrogen storage tanks on site, so we will still be warned against smoking while filling. Remember the Hindenburg!

PS. Just around the technological corner is a super thin wafer home roof array/Hydrolyzer that fills your car at home. Here in OZ, research is advanced that will allow us to paint our roofs with solar collector paint. No twinges today, just excitement and hope.

By the way, if you have a few spare minutes, Google Hydrolyzers and read the scams.
Did you know, by buying a book for $39 (cheaper on e-bay) you can get DIY plans to make your own Hydrolyzer from stuff you can scavenge from the dump? Then you can run your car on water! 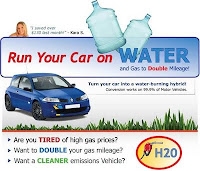 Well, most don’t claim that. What they do claim is a significant saving (25% and up) saving in fuel consumption by converting water to a mix of H and O as you drive which supplements your gasoline or diesel.

Of course to believe that, one must discard one’s science that states ‘energy cannot be created or destroyed’. Such a shame. It would have been really nifty to run my car on water!

Car pics courtesy http://www.hydrogencarsnow.com
Posted by Stafford Ray at 5:52 am