The most exciting news for this month for the Global Greens is the electoral success of the German Green Party.

At the end of March elections were held in the German State of Baden-Württemberg. This is one of the richest areas of Germany and has traditionally returned a Christian Democrat government. But in this election the Greens managed to double their share of the vote to 24.1% and finish in second place. They are now in a position to form a coalition with the Social Democrats and to be the leading partner in the Coalition. This should result in Greens Leader Winfried Kretschmann becoming the Green Party's first regional "minister president" (State Premier). 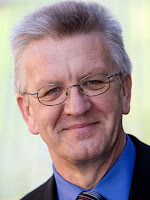 We don't know of any other cases in the world where Greens have lead a State government. Reports suggest that two issues led to the Green's meteoric rise: dissatisfaction over a major project to redevelop Stuttgart's main railway station, and fear of the State's reliance on nuclear power following the Fukushima nuclear plant disaster.