Last weekend I attended the inaugural meeting of the Rural and Regional Greens at Beachmere, SE Queensland. The reason such a body was formed was to educate the public about the dangers of coal seam gas but specifically to warn of the consequences of accessing coal seams by drilling through Australia’s priceless underground water resource, the Great Artesian Basin.

Water in the Basin starts its journey in rainy Papua New Guinea and travels thousands of kilometres south through permeable rock to underlie 22% of the continent, or 1,700.000 Sq Km. It is estimated to hold 65,000 cubic kilometres of fresh water and is crucial to the viability of dryland farming in Central Australia. That natural wonder is under immediate and dire threat. click here for ‘Potential depletion due to coal seam gas’. Here is revealed that leaks have happened and 48,000 such gas wells are planned for the agriculturally rich and irreplacable Darling Downs alone. This is a big deal. 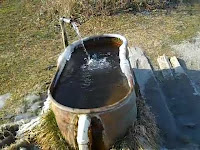 Coal seam gas extraction contaminates ground water and causes its confining strata to be breached. Are we risking permanent destruction in exchange for thirty years of gas extraction? We are, apparently!

We know it is not ‘if’ but ‘when’,
So we asked the gas miners again.
They answered; “Of course,
It de-stroys the source.
But we will be long gone by then!”