Paul Keating has turned into the classic Grumpy Old Man but like most of us, he occasionally says something notable and he did so this week. Viz, “Abbott’s attitude is that if he isn’t given the job he will wreck the place!” Seems he is right, but read on to understand why he is really hell bent on 'wrecking the place'.. 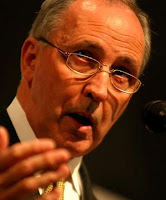 So despite the lowest unemployment and government debt in the world, highest terms of trade and because we still pay less for oil than we did three years ago, our national confidence is way down and support for the Government abysmal.

So what is destroying our self image when we should be feeling confident if not a little smug?

Any reformist government must ride out our inbuilt distrust of change as did the Howard Government when they introduced the GST, in retrospect a positive change. Our current government embarked on an overdue overhaul of policies on several fronts, including Climate Change and was supported by the voters. What they did not expect was the emergence of a new dumbed down style of opposition that started under Malcolm Turnbull and became total warfare, with no regard for destructive side effects under Tony Abbott. 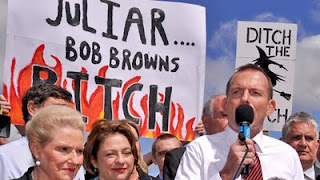 The tactic is simple. In this age of the Celeb, the image of the leader is the image of the party, so they now  ‘play the man’ by continually naming the Prime Minister as incompetent, wasteful, dishonest, and responsible for every negative that happens and if no crisis exists, invent one. Now, before we look back with nostalgia to when Malcolm led the Opposition, remember his carping became so mean and negative he was dubbed by some in the press as the ‘Bishop of Quibley’. His relentless pursuit or Rudd culminated in the attempt to discredit him by using an approval-seeking bureaucrat to spy for him. Then despite Mal’s coaching before the spy appeared before a Senate enquiry, he admitted he had invented it all 'because I thought it was expected', leaving Malcolm with egg on his face. But that was not what brought Malcolm down. His response to Climate Change and his entry into negotiations with Labor so upset his corporate supporters that they demanded he be replaced.

So, he was rolled and replaced by ‘climate change is bunkum’ Tony Abbott, who spends his time now stirring up anger in all ‘polluting’ industries, warning workers (voters) they will all lose their jobs under this 'toxic tax', when what is proposed is an overdue and very modest start towards a clean energy future.

Now, take a side trip to this post from September last year and treat yourself to a little déjà-vu. Keep in mind the vitriol and scare mongering currently coming from Abbott, Labor bashing coming from Newscorp media and this week, Abbott declaring that, after he wins government (now looking likely), he will bring on a double dissolution and a fresh election to gain control of the Senate. Skip the first bit if you like, picking up the exchange between Abbott and Digger Pitt. Here is the link.
http://staffordray.blogspot.com/2010/09/long-day-in-politics.html
Posted by Stafford Ray at 9:28 am