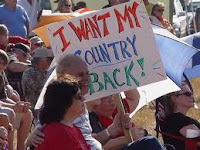 This light-bulb moment popped into my consciousness yesterday.

Watching rallies in the US for “American values”, expressed by people understandably uneasy with change, I wondered if Osama Bin Laden was winning in his quest to destabilise America.

Then the light-bulb moment. Even at the peak of racial injustice, black America still saw itself as American first and coloured second, so their dissatisfaction offered scant opportunity for exploitation from outside America. The ‘Black Muslim’ movement was too soon to tap into terrorist networks. It made its point and supported Black Pride but faded as coloured Americans claimed their place through education and involvement in the political process. Powell, Rice, then Obama carried the baton in that final leg to what appeared impossible a generation earlier.

Now we cannot afford to alienate citizens to the point they shift allegiance from our nation to those who desire its destruction. Here I am speaking to the Terry Joneses of the world as strongly as any Muslim offended by him. Criminals who kill under the banner of Islam must be publicly denounced and identified by Muslims. Long term peace, not only in America but worldwide, depends on people rejecting violence in their own. But they too must be supported by everyone being absolutely committed to supporting laws that guarantee equality regardless of gender, religion and sexual orientation. Nothing is to be gained by blaming a whole religious or racial group for a nation's woes.

I always thought the invasion of Iraq 'to impose regime change' was wrong and was uneasy when we went into Afghanistan to ‘smoke out’ Bin Laden. I was uneasy because Democracy is so difficult to impose. Almost everywhere it exists, it was home grown. Even the original Tea Party movement, the turning point to American independance, when British rule was rejected and America created its own democratic government, came from inside.

But how? How can people find peaceful solutions with so much violence breeding even deeper distrust as nation after nation is torn by militant religious fanaticism?

Then came the second light-bulb moment, as I thought of the Peloponnesian Wars. Twenty eight years of hatred and slaughter was ended in a week when the women of Ancient Greece took control. Women are the key to this one too, as expressed in this poem, ‘channelled’ through thousands of years to me from the heroic Lysistrata.

Mothers of Islam, virgins no more.
Prisoners of your own making.
Only you can set them free,
your children and your men.

Pics borrowed from here and here.
Posted by Stafford Ray at 6:57 am