Helen (bless you) went right back to my first blog (Carer Blues One). She commented that she, like me, wrote to stay sane while caring for her dying mother. After almost two years of 24/7, my sister Jen and I eventually agreed to hand over day to day care to a nursing home where we could visit Mum every day.
A severe stroke should have killed her but didn't, leaving her physically helpless but mentally bright with memory and even her wicked sense of humour intact. Loss of speech was the worst, preventing her from communicating except by way of a printed alphabet, which she could race over (using her one good finger) so fast she needed an interpreter.

Her nightmare began because a report that detailed Mum's disabilities and abilities was not read by the staff. So through the first day and night, they spoke to her and treated her as as if she were an incontinent mentally retarded two-year old. When I arrived next day to challenge Mum, the Eden (home town) Scrabble champ to a war of wits, she was crying. She explained what was happening so I made an appointment to see the CEO for next morning and in the meantime wrote this poem which I e-mailed to her so she could read it before our meeting.

Sometimes poetry can express so much more. So to Helen and other carers, here is what I believe is my best poem ever. The picture, taken just now from the starboard bow of my 'floating flat', prompted me to share this poem with you at this time. 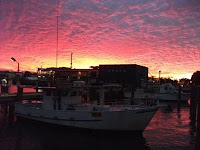 She sits and she stares
at the door to her world
from which she came,
to this allotted space.

Craving assurance;
a human embrace,
while latex plastic hands
touch only from necessity.

This little time, a miser’s gift.
Last chance to ease her passing,
with what will not be given;
The Final Validation of her existence.