No, my face is sunburnt is all!

Peter Young is an exceptionally personable young man who sold advertising for Channel 3 Newcastle but also played drums. It was in his drumming persona that he managed to embarrass himself and give me a gift of pride and a paroxysm of laughter that multiplied his discomfort.

(This is a view of Shoal Bay near the gig we shared at Nelson Bay RSL Club, and the lower picture is of wildlife one encounters regularly wandering the beaches.) 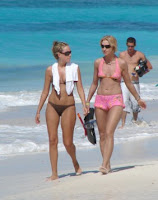 However, our audience that day was the usual mix of retirees, old couples huddled together over their one beer of the day, a few elderly singles filling in a boring afternoon and unusually, one young couple. The man was darkly handsome with brown-grey skin that glowingly covered his muscular body. But for all his beauty, he was eclipsed by his companion.

Some girls are blessed with lucky genes and she had them all. Tall, with all her bits in the right places and of excruciatingly attractive proportions, she was dressed to leave nothing to the imagination except her phone number. I missed their entry, being engrossed in the dots and lines of a difficult bass part but Peter's eyes followed them all the way as he mumbled ‘Wow! Holy Zildjian!' and such.

Drummers have a reputation as connoisseurs of physical beauty. Actually, they are no less inhibited than the rest of us, but they do have opportunity. Drum charts contain such directions as ‘play sim 20 bars’. This gives them twenty bars to appreciate whatever else is there to be seen. So, despite his natural decency and shyness, Peter could not contain himself and had to share.

We had reached the end of the set when he jabbed me in the ribs with a drum stick and in an excited stage whisper directed my attention to the subject of his unabashed appreciation.

I looked to where he was pointing to see a spectacularly beautiful woman stand and walk away from her companion. Very short shorts and halter top were in artistic contrast to her lightly tanned and flawless skin, glowing blonde hair and dazzling smile competing with glistening hazel eyes as she swung towards us.

‘Get a look at that!’ he growled again when she approached to stand so close he could have touched her.

But it was me she was looking at and I felt Peter’s disappointment as she blessed me with her husky greeting. I stepped from the stage to take her proffered hands and gently kissed her smiling face.

‘Hello gorgeous!’ I laughed, with a glance at Peter. ‘What a surprise!’
‘Hi dad,’ she answered, correctly assessing the situation and throwing Peter a consolation flash as he turned to slink away, face red and head bowed.
‘Thought we’d surprise you.’

I called him back.
‘Come here Dopey,’ I laughed. ‘Come and meet my daughter Jessica!’
He did and she kissed his cheek too.
Posted by Stafford Ray at 6:11 pm

Email ThisBlogThis!Share to TwitterShare to FacebookShare to Pinterest
Labels: Tales of the famous and not so famous.