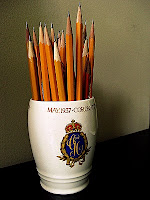 George was nothing like his brother. Edward had the advantage of 'knowing' Mrs Simpson, a divorcee who could show him what went where. With war brewing and Mr Hitler rolling his tanks around Europe in his version of ethnic cleansing, poor stuttering, bed wetting George was pushed onto the throne. He had two lovely girls but seemed to have stopped breeding. The country needed sons and he was advised to ‘get cracking’ as the saying goes.

Of course no well bred Englishman would express such an idea as crassly as we colonials would, like 'Listen George, old mate, you need to dip the wick, hide the frankfurt, let go the legless lizard, you know, get old Liz up the duff!'

But his advisors did get the message through eventually.
'I-I'm not sure I can,' Geo VI stammered, excruciatingly embarrassed. 'I-I can't seem to get it up!'
His advisor thought for a bit then whispered his advice.

Next day, there on his desk in his coronation mug sat a brace of sharpened pencils.
'What are they for?' asked the advisor. 'They weren't there yesterday.’
'N-no', said George, 'I rang the palace shop and told them what you said I needed and they sent them up.’ He looked puzzled. ‘I don't see how they can help.'


Visit Magpie Tales
Posted by Stafford Ray at 8:27 am