It was the year De Havilland built its first jet fighter in Australia. Thunder shook my body for minutes as terror mounted while I scanned the horizon for its source. A tiny speck appeared, streaking downward in a dive that pulled out too close to the ground, broadcasting its waves of shock to rattle crockery and spook cattle. Weeks later, after waiting and watching for a repeat performance, I judged the pilot must have been spoken to rather harshly because it never happened again. 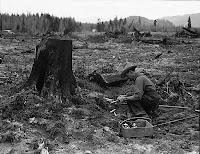 I was thirteen and we were blasting stumps on the new farm, me hammering in a piece of water pipe and withdrawing it to leave holes around stump roots while Dad crimped detonators onto fuses and pushed them into Dynamite sticks. Each stick was lifted gingerly from its wooden crate while he complaining ‘they were sweating’, apparently not a good thing.

But we had great fun lighting the fuses and while they hissed and spluttered, we ran faster than necessary, to hide behind trees where we involuntarily closed our eyes to the detonations then watched as bits of stump and soil flew past. But, with the job only half done, it all stopped when we ran out of caps and fuse. So Dad sent me for more.

Now, I don’t mean I went to the shed. I was given a note, a signed cheque and two shillings for the train fare to Parramatta. First a bike ride the three miles to Cabramatta Train Station, change trains at Granville then a long walk from Parramatta Station to Murray Brothers in Church Street where I presented the note and cheque.

Two boxes of caps and a roll of fuse in a hessian bag (with receipt) were passed over the counter and I was off. The only advice I received was to not open the boxes of caps. But on the train while nobody was looking I slid back a lid and picked out one bright brass cap as carefully as I had seen my father do, turned it gingerly in my hand, examining it for signs of hidden harm, then guiltily slipped it back into its sawdust nest, none the wiser.

My safe arrival home three hours later was barely noted. It was expected, as was every other event of that day, except the breaking of the sound barrier, in an age when trust was assumed.

(Pic courtesy Wikipedia)
Posted by Stafford Ray at 5:07 am