You had better be quick!

A few years ago I had a new sail cover made from duck at a cost of $500.
A sail cover is pretty basic. Just a more or less rectangular sheet, hemmed with a zipper on one end and an eyelet on the other, with a few clip-together straps in between.
As I now need two new sail covers plus new mattress covers plus new covers for the dining alcove cushions, plus (if I can handle it) sail repairs, I decided that I need a sewing machine and began to research them. I was advised I would need a machine that had a 'walking foot' for the thick stuff, a high lift foot and was powerful enough for vinyl and leather.
At Spotlight (FYO Spotlight sells mainly stuff for sewers. No, silly, not those smelly old pipes in the ground, I mean those old fashioned people who still make things with needle and thread), with IXL, who had developed a yen to compete with Beijing and sew clothes for sale, I saw what I wanted. It had all of the above. 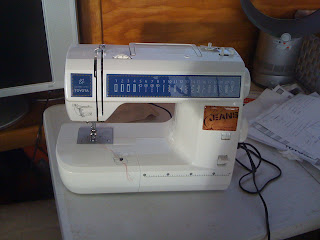 How much? $249.
I thought that was a bit too cheap to be any good but was advised by Lynne that it came with a three year warranty. Then when I hesitated because I was still wondering if it was too cheap to be any good, Lynne advised me to 'wait until next week and it is on special for $75 off'.
So I told her to put my name on it and I would be back. Then, while IXL was busy choosing enough cloth to do a Christo and wrap Sydney Harbour Bridge, I filled out the application form and received a VIP Club card.

Two days later, in the paper there appeared an ad for Spotlight that offered 20% off all sewing machines. Also I was reminded that VIP membership entitled me to a further $40 off any purchase over $100!
Are you still with me?

When I presented the ad and my VIP card to Lynne, she was surprised to say the least. But she agreed with my maths, so here is my brand new Toyota Jeans machine for $160! Howzat!
(This confluence of offers ends today).
Posted by Stafford Ray at 6:40 am

Email ThisBlogThis!Share to TwitterShare to FacebookShare to Pinterest
Labels: Funny odds and ends