Dart: Verb transitive, to move suddenly. Dart: Noun. 1. Pointy thing thrown in the general direction of a target to fill in time between drinks. 2. Sewing term meaning shortening by pleating and sewing together a triangular section.

The pattern did not work. Where the sections overlapped, there would be three layers of material. An experiment using a small off-cut revealed the flaw. Three layers fitted (only just) under the foot when it was lifted to its highest point. That raised a sweat and but I went ahead anyway.
When the machine hit three layers of vinyl at the seam it made a very unsettling noise and jammed with the needle down. So, remembering Sue J's advice, I opened the bobbin thingy and removed it. Apparently the machine could not pull the needle with thread back up through three layers, so I cleared the needle and had a rethink. 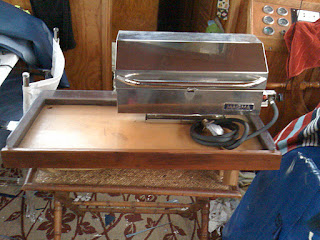 Here is the BBQ on its table, so you can see its complicated shape. Yes, I made the table from left over bits of seating and window polyglass. The curled up tube is the gas bottle connector and you can see its control on the right. The cover must go over the whole thing so it can be left attached to the rail and still be protected from sun and rain. On the right just visible under a towel is a bit of my old pirate ship wheel, covered to keep the sun off.

So as an experiment, the vinyl sheet was laid over the whole thing and the corner darts pinned from the underside until it fitted as well as a flat sheet can. Then the darts were sewn with straight stitching several times, each time making the darts tighter until it slipped over the BBQ and table neatly then the excess was removed. Next, a 3/4" hem to hold elastic was sewn all round using the widest zig-zag, stopping at each dart where the direction was reversed for an inch or so to prevent unravelling, then missing the dart and starting again on the other side. 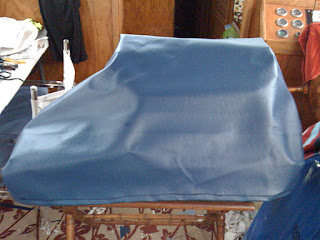 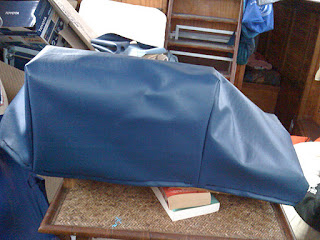 (There will be no close up shots of the hem stitching or the knee deep mess on the floor). When the elastic is threaded through, the plan is to hand sew the gaps (if necessary).
Sewing is now suspended. This morning I am off to Sydney by train to help IXL with her project (garments for the Canberra Hand Made Market Dec 17 and 18) where I am not allowed to sew. My principal function there is to run errands, mop brows, mutter soothing words and pour whiskey. Friday back here to get Heavy Metal ready for her move to Sydney for the festivities, including anchoring in the harbour for the excellent New Years Eve fire works display.
There will be photos if I can remember to take them.
Posted by Stafford Ray at 5:24 am

Email ThisBlogThis!Share to TwitterShare to FacebookShare to Pinterest
Labels: a bloke sewing