The Wooly Red Steer.
(a true story retold for Funny Bunny Friday at the Purple Treehouse.) 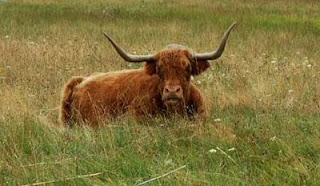 Dan Langan was the oldest man in town, nearing ninety, wiry and strong, he still rode his big white mare around the hilly property. We had a common fence that was an exercise in desperation. What was still standing was held together by baling twine and rust, but with a little repair by me, it seemed to keep my stock in and his out.

That was until the appearance of the wooly red steer. I arrived home to see him, not yet accepted by my four, grazing alone on my side of the fence.
I drove him out my front gate and pushed him into Dan’s place. Then I searched until I found what I thought had been his point of entry and closed the gap.
Next visit he was back.

Bugger. This time he had integrated with mine. They were now mates and would test the fence if they were separated.
It was time to see Dan.

Dan loved a chat and that’s what we had for maybe an hour. A pot of tea and several scones later as Mrs. Langan fussed over us and it was time for business.
‘Well, young feller,’ he said. ‘You didn’t come over here for a chat. What’s on your mind?’

I told him his red steer was back on my side of the fence and maybe we needed to put him in a more secure paddock.
His smile broadened as I spoke until he was laughing.
‘I thought the pest of a thing was yours!’
‘No, he’s not mine.’
‘OK,’ he laughed again. ‘Let’s eat him!’

Photo borrowed from here.
Posted by Stafford Ray at 5:41 am