In the eye of the Beholder Magpie. 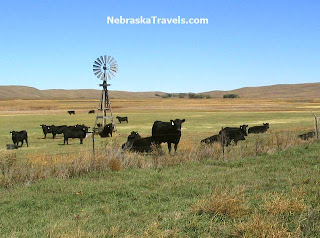 “What a kind and thoughtful plan,
Thinking, thinking, clever man!”
He said, while watching cows a-grazing.
“He really is. He's quite amazing!”


My furrowed brow and eyebrows raised
Should have said; 'I'm clearly fazed'.
But then I said; 'I've no idea
What is your meaning, please be clear!'


Then confounding revelation,
Added more to my confusion.
“I’ll be damned!” He said. “I’ve never
Seen devices quite so clever!”


None the wiser, needing more
To understand and still unsure
To what this city man alluded,
Thinking, ‘obviously, deluded!’


But soon enlightened I became
As Cedric went on to exclaim;
“Poor cows and calves, in summer heat
Suffer so, with no retreat.”


Then his eyes led mine to gaze
Further on through shimm’ring haze
To where the farmer, we discerned
Was sitting. “That’s a rest well earned,”


He said. “His kindliness rewarded
Should be talked about, applauded.
He clearly did the best he can
By putting up that cattle fan!”

More kindness can be found at Magpie Tales.
Picture borrowed from NebraskaTravels.com
Posted by Stafford Ray at 8:06 am