Hobbin Rood... Takes from the poor to give to the rich. 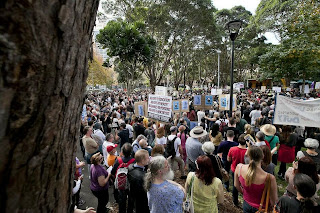 I think it started here with Graham Morris, political adviser and Mr Media Savvy, when he apparently advised John Howard to answer all question with the same slogan. It worked like this:

Q: “Mr Abbott, given that you promised no cuts to education, health, pensions, the ABC and I could name many others before the election and are, post election, cutting all of them, do you now concede that you lied through your teeth to fool the people into voting for you?”
A: “Err…. Um…. We have get the budget back into surplus. That is what we promised, and that is what we will deliver.”

In every interview I have witnessed, which is now in the tens and approaching the hundreds, I see and hear our Prime Minister follow the Morris sales mantra. But surely the strategy that worked before the election, that is, to simplify complex issues into a few slogans such as “Stop the boats!”, “Cut the Carbon Tax!”, “Get the budget back into surplus!”, is now wearing a bit thin.
To me it is pathetic to see our Prime Minister’s dogged adherence to a tactic that is dishonest and insulting to both the interviewer and the observer. I hope I am not alone.

Bill Shorten and Malcolm Turnbull, leader-in-waiting, could be well advised to take note. One might maintain that an opposition's job is to throw everything at the government to thwart its policies, good or bad, as Abbott did so relentlessly in opposition, but perhaps it is time for Her Majesty’s Loyal Opposition to think about a fair way to balance our budget, while not shredding those programs that make this country such a good place to live, regardless of one's status in life.

These leaders are speaking to one of the best educated constituency anywhere in the world, so perhaps it is time they showed some respect for the collective intellect and confided in us. I am ready to be part of a fair reduction in spending, but penalising the poor while leaving the wealthy basically untouched is too Ayn Rand for me.

Also, I am sure I am not alone in fearing that loss confidence in the political system will leave people ready to take their grievances to the streets, rather than the ballot box, as we are observing in the Balkans, Thailand, Egypt, you name it. Those people are not stupid or want to be destructive, they are basically frustrated by their lack of political access.

Of course there are always political vandals waiting to take advantage of that type of anger and when they do, it always ends in grief. Are we going there? Maybe we are unless we really take constituency seriously and stop rewarding dishonesty.

We enjoy one of the most peaceful and compliant communities in the world, but watch that unravel if we lose confidence in our political institutions. Big Clive didn't help much either, by accusing the Electoral Commission of corruption. Once we lose confidence in the basic honesty of our electoral system, it is very difficult to get it back.