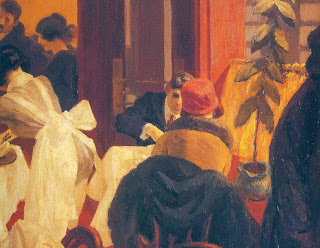 For a moment I thought Ostinov had me, with the queen in check to his bishop, but I blocked him with the king’s rook. It looked like a desperation move, but it wasn’t. I had planned it to happen that way. Then it got really interesting. I didn’t really believe he would fall for it, but he took the rook with his bishop. I had the bishop covered with my queen’s rook. He didn’t know it, but the trap was closing. He was distracted by my knight, just one mover from taking his queen and he failed to notice that taking my rook put him in check. He was really sweating then and I knew I had him. He had nowhere to go and it was mate! Cecily, that was the most exciting game I have ever played against Ostinov and it was in record time too. I beat him in under ten hours! Oh! And we have a rematch in a month, I’d really like you to come and watch!

Thanks again Tess for another demanding prompt!