It's bad enough that... without this.

Have a look at these pictures that are circulating on the web, then read down. 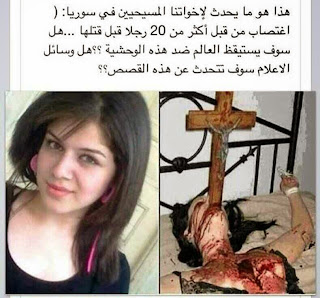 These pictures purport to show a young Christian women, raped and tortured by 20 or more Muslims 'just because she was Christian'.
In fact, the photos were lifted from a horror movie made by a Canadian that had absolutely nothing to do with Muslims. It was about a serial rapist.
Take the link for more details and (if you have the stomach for it), watch a clip from the movie showing the scene depicted in the photos.
My question is: How is this type of material helping Islamic women achieve the freedoms and opportunities Western women enjoy (to a point)?
It is hard enough for normal, rational Muslims to take control of their governments, identify and arrest their violent elements and demand integration with the modern world, without these distractions.
Some Muslim societies have a long way to go, no thanks to our 'help' in Iraq and Libya, for instance, but there is hope.
Out of the current mess, we can hope lessons are learned and less xenophobic attitudes emerge, both towards their own Islamic variants and the other hundreds of belief systems we seem to have created as a species.
Left to evolve, as might well be what is happening in Iran, citizens who are no longer totally quarantined from the wider world, but have access to information via the web, for example, will demand freedoms for themselves that they know exist elsewhere.
Posted by Stafford Ray at 10:37 am