Last night Sis 3 and I caught the train to the Old Fitzroy in Kings X to see a play. I was particularly interested because the writer is Mark Rogers. Who is Mark Rogers, you may well ask? Mark Rogers (note I have written the name three times so you will remember him), is an up and coming talent in several of the dramatic arts, and he is my granddaughter Ahleigh’s bloke. That's him in the pic below. He usually looks less battered. 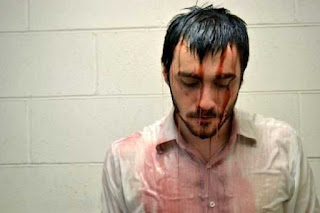 So I had to go. Right? No, but I am very glad I did. Mark's play, directed by Sanja Simic explored the phenomenon of ‘investment’ in another person’s life, and the right of the ‘investor’ to interfere in that life.

Parents make a huge investment in their children and do assert control, that wisely directed and with a bit of luck, turns our children into adults we are proud to know. But outside that relationship, how much right to control can we ‘buy’.

Dale Carnegie offered the proposition that: “If you want someone to like you, don’t do something for them, let them do something for you.” Seems counter intuitive until we realise we are allowing them to invest in our success. The moment someone invests money, time or love they are hooked into a supporting role to protect their investment. This play, Blood Pressure, as the name implies, explores pressure of ‘ownership’ that starts when one brother donates an organ to the other.

The donor cannot stop himself taking responsibility for his brother’s health. The organ is being rejected but the sick brother will not seek, or even agree to treatment. He is tired of the business of being sick and just wants it to stop. His brother reacts with increasing frustration until the tussle over control of his life escalates to the point where the donor brother becomes so frustrated with his sick brother's refusal to allow him to take control, that the donor suicides.

Such pure tragedy is rarely done so well. But it is the question it explores that makes this play so special. No dramatic work I know of has ever explored this particular human interaction from that point of view. In fact I doubt Mark is quite aware of how important this play is! 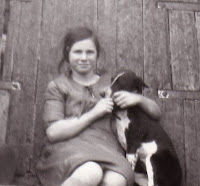 After the’ curtain’ I sat for a while. It brought back vividly the plight of my mother who, following a crippling stroke, tried so hard to recover enough to be independent again, but after a year and a half, she knew she had done all she could and was never going to make it all the way back.

Once she realised she would never regain her dignity, she just wanted it to all end. But streams of visitors continued their relentless encouragement.

Most who visit the terminally ill try to be cheery, when in fact all they need is a loving hand to hold while they get on with dying. Eventually she took control and emigrated!

Many in the family are still wondering why she moved out of range of their visits. This play put flesh and blood onto the bones of my not-totally-formed understanding of what she did back then. Of course she died, but only after she insisted on her right to stop fighting and just let it happen.

She removed the ‘Blood Pressure’ by removing herself, all the way to New Zealand, so she could die peacefully, in the end, satisfying nobody’s expectations but her own. I love you Mum.
Posted by Stafford Ray at 9:39 pm