Yesterday, I took Sis 3 to see a doctor. She arrived on Sunday last from Sunny Queensland to cheer me up. As some know, I have suffered a few losses lately but none know quite how many. All up, it has been a crowd of grief over a short period. So, considering the state I was in, I handled what happened with outstanding aplomb!

Sis left me in the waiting room with a pen and a crossword, so I was happy, but as I came to the last clue, a man leaned over the gap between seats and, in a very educated English accent, remarked; “You must be very clever to do those!” 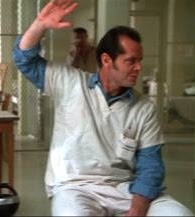 I looked at him, smiling, leaning so close that I was glad he paid attention to mouth hygiene and took in his appearance. He was well dressed, nice clothes, well groomed, even features, intelligent eyes and good looking for a middle aged man, but before I got around to an answer, he challenged me with two statement that caused me to wonder. “I know everything there is to be known. Ask me a question!” I thought I would go on with the game;

“You don’t know my name, but you could easily find out.”
“I can levitate and I can be invisible!”
Now I was intrigued.
He sounded and looked too normal to be a nutter, so I waited.
“Many people don’t believe me,” he confided. “But if you go to Sydney, there must be a few that can do what I do, don’t you think?”
I opened my mouth to agree when his name was called and he disappeared through a door marked ‘Psychiatric Services’.
Damn! I wanted to see him do his stuff!
Posted by Stafford Ray at 8:18 pm