An arrest has been made and I spent last evening making a statement to police detectives, who were not only smart, but were gentle and patient. Considering what they see every day, they manage to remain caring and compassionate, and as Julia, the lead detective said, in this case they got lucky.

The good luck began with CCTV being on the spot and a suspect identified as a person who had already come to 'the attention police' that night. His home was searched and he was taken into custody where he remains, having been refused bail.
A witness called an ambulance for David, but that is where the luck ended. Despite a bleeding head wound and, as later discovered, a brain haemorrhage, he was not examined by a doctor at the hospital, despite a wait of over three hours after which he left, probably in frustration and needing a smoke, and died in a park across the road.
There are a lot of questions being asked and few being answered.

Now for some Easter pictures.
The camera does not show how close they are, or how many there are! The cabin roof in the first pic is of Swan Song, IXL's old wooden boat, soon to be sold. She has been tied alongside for a month so I can access 240V power for sanders etc, but the work is almost done. Then she goes onto the slips for a clean and antifoul, then out of Yeomans Bay and into E-bay! 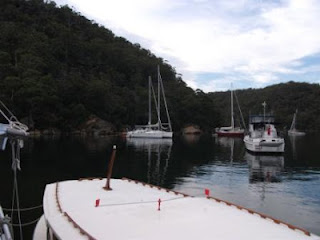 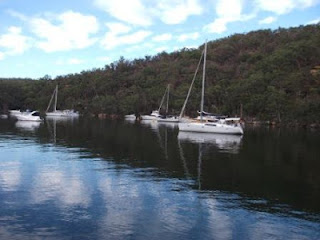 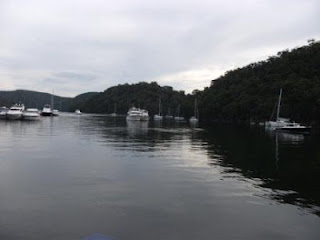 Arriving home late last night (I take a dinghy ride of about a kilometre from the tie-up to Heavy Metal) I was greeted by a fairyland of lights. This morning, daylight revealed over fifty yachts and cruisers jammed into a space that usually sees about five!
Perfect weather and the long weekend has drawn every boat that floats to Cowan Creek it seems.
IXL is at Mosman Market today selling her hand-made fashion garments but tonight she will visit and we will be joined by Neil and Heather in Tiki for a BBQ and catch up.
That is what I need right now; good company and a break from drama!
Posted by Stafford Ray at 9:31 am