When a loved one dies on your watch.

His name was Stafford but with a father and grandfather of the same name close by, we called him David to avoid confusion and that might have been the first rejection.
Crawling around the feet of a practicing musician he was exposed to the best, Bach, Beethoven, Count Basie, Sinatra, Barney Kessel then Blood Sweat and Tear and the new wave of drummers of the super groups.

At three, on the one hour drive from his nanna’s, his incredible memory and vocabulary regurgitated in detail the story of whole movies. At six, he made up a drum kit from cans and boxes, so at eight when he persisted, Santa arrived with a real kit.
Then it was concerts with Frank Zappa and Chicago.
By twelve he was playing like a pro and seasoned players came to hear and learn from the prodigy.
By early teens his talent was too good to keep at home and professionals booked him for gigs. He was flying… but where? We were not ‘watching his back’ and he was introduced to drugs by his adult bandmates, who probably thought it was funny.

By his mid teens, strange things were happening, unfathomable lapses. Amazing opportunities blown like in the Man With the Golden Arm. A pattern was emerging. First time in a band, he was a star then next time, he arrived stoned and was sent home. None understood, not even me, who was so proud of his genius. I am sure I must have, but can’t remember telling him so. And after learning of his addiction, I was too confused to know what questions to ask. Even he did not understand what was happening to him and despite his prodigious insights and ability to express his feelings, if he did, we were not listening.

Just yesterday I had this thought:
Any prodigy only becomes so by having an extraordinary and detailed vision of a goal at an early age. In David’s case, his musical standards were assumed by osmosis while he was still a baby. His eagerness to play music was welcomed but nobody watching was aware of his anguish. What appeared to be perfect to us was never enough for him. He outshone the best of them, but failed his own test of worth. He never felt he was good enough.

If this is true of most prodigies, it explains why so many young celebrities fall victim to addictions. He was handsome, funny and when working he earned good money. Marriage and fatherhood gave him stability for a time, but even that was not enough and feelings of inadequacy drove him back to heroin.

Some get over it, but for some, they become dead men walking, repelling those who would help if they could, but having exhausted their patience, give up. From there, rejection and a failure, made bearable by drugs, completes the downward spiral to homelessness and all the terrors and horrors that brings.

But somehow, he managed to get clear of heroin and even beat methadone but alcoholism was a bridge too far. He keep himself clean and almost always had a phone and an i-pod. All he owned was carried in two shopping bags and all his clothes except undies, he wore all the time. And he found friends among the homeless and with them he spent his days, so there were good times. But he always yearned for contact with the daughters and siblings he loved, and he did love with a heart that was big, generous and forgiving, in the end, even of himself, his toughest critic.

His girls did give their love, and even sought him out when they could as did I. But although I had long stopped trying to change anything and just enjoyed being with him, accepting that he could not change either, I never really understood what kept him where he was and I doubt anyone else did either, at least until yesterday. Almost a week after he died alone and in despair, I think I finally got it. 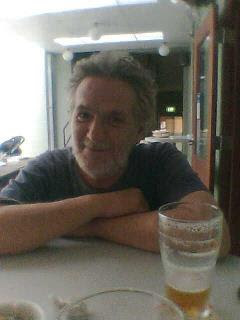 Foresight can one’s life enrich
Lack of it, our dreams unstitch.
Ignorance, they say is bliss
But hindsight can be a cruel bitch.
Posted by Stafford Ray at 5:28 am