When the going gets tough...

For someone who was born to have a maidservant to tidy up and put screw caps back on jars, IXL coped extremely well. I managed to hide my anxiety during the crisis or her composure might have cracked. Mine went close.

Earlier in the day a multi million dollar plastic cruiser had anchored in front, too close for my absolute comfort but hey! I was here first and it was his problem if we collided and Heavy Metal cut her in halves. 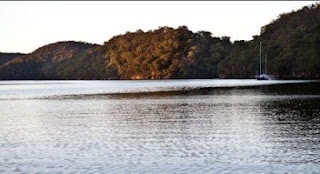 Legally that is the situation but when a severe storm cell hit about ten that night, with torrential rain, continuous lightning and fierce winds, liability was forgotten when the electric sky, like an old jumpy movie showed the big tub being blown back on a collision course.

We started the motor to be ready in case we needed power and IXL put fenders along the side while I managed to contact Marine Rescue on the radio despite the continuous lightning crackle while the gap closed. But then a wind shift and she was passing almost close enough to touch. We could see there was nobody home. Help was coming, but for now we were on our own and there was nothing more we could do.

My real worry, that I did not express, was that their dragging anchor would pick up our chain, dislodge our anchor and then we would be dragged backwards with no way to steer. But that did not happen as she slipped further into deeper water and seemed headed for rocks at the western end of the bay.

By then the cell was moving away and as the wind dropped a light appeared aboard the runaway. They had been out to dinner at the salubrious Cottage Point Inn when mayhem hit and it took them that long to get back, climb aboard and reset their anchor in whatever state of sobriety the emergency found them.

IXL and I, wet through and shivering, dried off, changed our clothes and settled down to a midnight hot chocolate when we were alarmed to hear a horn and shouting. We rushed up on deck with our steaming mugs. It was the water police, half an hour too late, wanting to know 'name rank and serial number' of the person who dragged them from their warm beds on a wild goose chase!

Later as my mind replayed the movie, I amused myself with the thought that during the crisis, IXL had obeyed every instruction I yelled at her to the letter and in double quick time. But I kept that thought to myself.
Posted by Stafford Ray at 3:55 am

Email ThisBlogThis!Share to TwitterShare to FacebookShare to Pinterest
Labels: Life aboard.