Evidence of crime comes to light after seventy years. 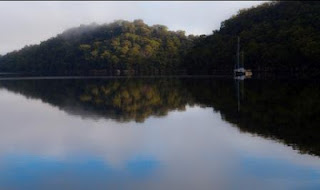 Yeomans Bay was empty when we arrived to take up a public mooring, but there was a problem.
In bold black was the caveat. '14 metres max. Penalty $3,300'. Heavy Metal is 16.4 M, so we moved away and dropped anchor in 11 metres in a moderate wind and tied the stern off to a rock to protect a Tupperware yacht on a mooring within swinging range.
So why am I boring you with this?

During WWII, in this area of wooded bays of deep water surrounded by high sandstone hills, ships were hidden from Japanese submarines operating off the coast. In Refuge Bay, just a few miles away, a captured Japanese fishing boat, renamed Krait after the deadly little sea snake of the same name, was prepared for her heroic journey to Singapore where this little fishing boat successfully penetrated Japanese defences and using canoes and limpet mines, her Australian crew destroyed 35,000 tons of Japanese shipping then escaped in the confusion to return untouched to Australia.

While untying the stern line I noticed an anomaly in the waterside vegetation and investigated. There I found a nest of very old beer bottles, some broken, some not and took one for closer investigation. This thick dark brown bottle is inscribed; 'This bottle is the property of'' around the neck, then around the base; 'The NSW Bottle Co Pty Ltd' followed by a crest, then; 'I.S. 89D1411971', under which is a double ring of raised lumps that would  make it a little less likely to slip.

As far as I can ascertain, these bottles were produced back when glass containers were returned to bottlers to be refilled and they paid about 6 pence each for them. The inscriptions and numbers suggest they were bought between 1930 and 1950 so considering the history of this bay, one can imagine a scenario that brought these bottles to this place. 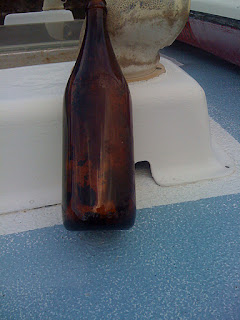 Imagine a few dozen Australian servicemen holed up here waiting, bored and thirsty. These were young men with guts who had volunteered for very dangerous missions.

They were resourceful and bold so it is not difficult to believe some would steal a one dozen case of beer from Stores and have a little drunken soirée, leaving the tell tale bottles under the thick forest floor where they lay hidden for almost seventy years.

Email ThisBlogThis!Share to TwitterShare to FacebookShare to Pinterest
Labels: afloat