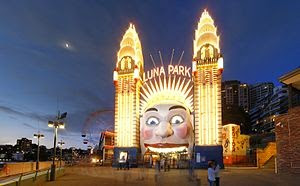 I popped back mainly to say hello. My new photo (Harry Fromm look-alike) features a fake gun you will be relieved to know. I found it at a local supermarket among toys reduced after Christmas.
This photo is of Luna Park in Sydney. Last time I visited, must have been sixty years ago and it was that visit which turned me off it forever. The new Rotor had been installed, received publicity and of course I had to try it. For those who do not know, the Rotor is like a well that has a floor that starts high enough so one can step onto it. Then the floor drops until the walls of the well are high enough so riders are inside the well and can't fall out. Then the 'well' begins to spin and accelerates until all riders are stuck to the walls, held there by centrifugal force. Then the floor is lowered again so onlookers can observe the phenomenon. Unfortunately, I was not happy. As speed increased, my inner ear told me I was lying down but my eyes disagreed and saw other victims spinning and the grinning idiot observers above, swirling around. That, as any sailor will tell you, is the precursor for seasickness. The eyes and ears send conflicting messages and up comes anything consumed in the last few hours. I had eaten a meat pie, an apple pie and washed them down with an industrial sized caramel malted milk shake. Luckily I got off before the eruption, but the nearest garden bed received an unusual load of mulch.


Luna Park
The Rotor, supposed to be lovely
We rode on it, spinning like buggery.
But what looked so easy,
Made me very queasy.
I threw up right there in the shrubbery.

Go to Magpie Tales to read some wonderful poems and stories from Tess's friends.
Posted by Stafford Ray at 8:58 am