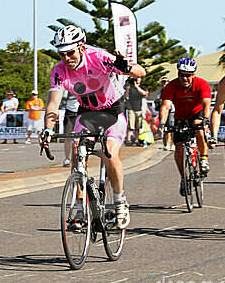 This is not a criticism of Tony Abbott’s attendance at fires as a member of his brigade, or his bike riding in events that raise money for charity. They show he is a ‘good bloke’. However, perhaps the fact that he still pursues those activities after becoming Prime Minister, our Chief CEO, could be an indication of his management style and it could be fair to wonder if he is ready for the big picture.
Denying that wild fires in Australia are influenced by Climate Change, while running around the bush with a fire hose, may be the clue that explains why he favours a policy of direct action over a cap and trade system to mitigate climate change. One would expect a Conservative to have more faith in a market driven system than one that must meddle and cherry pick its targets, needing a dedicated bureaucracy, charged with the task of deciding where, when and how much is to be give polluters not to pollute. One wonders why he doesn’t pay Philip Morris to stop making so many cigarettes!


One suspects that his direct action policy is really driven by his determination continue to negate every Labor initiative, regardless of merit. Let’s hope he lets go the ideology and starts to think things through. Tony’s scattergun approach to problem solving is also revealed by his ideas of buying up Indonesian fishing boats (since withdrawn) and his tree planting pledge (since withdrawn). Germaine Greer was right to ask: (paraphrased) “How can a government headed by a Rhodes Scholar be so stupid?”


So here we are, with apparently intelligent people, defending the indefensible, about to witness the repeal of the only mechanism experts agree has any chance of delivering lower emissions in a world that is burning up before our eyes, simply because Action Man wanted so desperately to become PM and stay there. If he continues to deny the science, let’s hope Tanya Plibersek gets her wish that he is indeed One Term Tony. With the whole world desperately needing leadership on the big issues of overpopulation and climate change, being a member of a fire brigade is not enough.
Posted by Stafford Ray at 5:27 am