Stomping and other sports.

While Lyle Gilmore was the principal of Dooralong School, at age about forty, he continued to play rugby. Monday morning he often turned up with a bruise or a sore knee, but on this day, his face was swollen and torn, with a Betadine stained and stitched cut starting from is mouth and ending at his left ear. His face looked like a hand-made wallet.
‘A hundred and sixty eight stitches.’ he was able to mumble through diced-tomato lips.

When talking was less painful, he explained he had been ‘stomped’.
‘Stomped? You mean intentionally?’
‘Yes, intentionally.’
‘So this bastard makes a habit of ripping up people’s faces.’
‘Apparently.’
‘Can’t you sue the mongrel?’
‘He was banned for a few matches, that’s all.’
‘So behaviour that would land you in jail is OK on the sports field!’
‘Yep!’

Now, with video footage recording incidents of intentional foul play, good evidence is available to show if an act was intended to injure a player for the match, the season, or for life.

Intention to seriously injure was never part of any game. We now have the technology so it is time such breaches were recognized as criminal assault and dealt with in courts of law, damages awarded and punishment meted out, including fines and jail time if appropriate.

I contend that would stop intentionally inflicted injuries overnight. 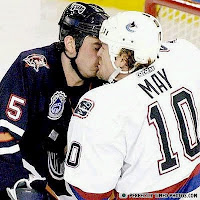 However, there are some on-field encounters we cannot legislate against, but if only out of common decency, wouldn’t you think they’d get a room!?