With so much publicity being attracted to predatory behaviors of some unbalanced individuals within religious organizations, it may be time for Catholicism to rethink its insistence on celibacy. Evidence indicates that forcing human beings to deny natural instincts distorts their moral boundaries.

However, sexual abuse is not the only aberration closed societies, religious and otherwise, produce when they exclude the averaging influence of the wider human community.

One only has to recall the Jonestown tragedy to be reminded of the hundreds of lives lost, including children, who as Richard Dawkins points out, are not Labor/Liberal/Christian/Muslim/Hindu children. They are just children, not yet having the maturity to choose political party or religious affiliation. But they were killed along with their demented parents, all victims of a closed sect whose thinking became so skewed that it led to the suicide-murder of hundreds of their own.

Of course, skewed thinking occurs wherever people choose faith over evidence and close their minds to challenging information and ideas. Closed minds can produce bizarre results. Here is one. It concerns the then recently deceased (ex) Australian Attorney-General in the Whitlam Government, (picture) who successfully changed the Family Law Act to introduce no-blame divorce, removing the need for farcical games, played to establish fault if none existed to comply with the law as they attempted to end toxic marriages.

Time: A week after Murphy’s death from cancer.
Place: On the roof of our Community Hall, me helping the tradesman rewire its outside light fittings. 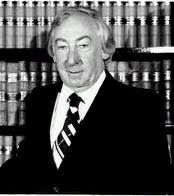 He said: "We got rid of Murphy!"
Me: (expecting a joke) "Murphy’s Law?"
He: "No, Lionel Murphy. Ex Attorney-General, anti Christ. He changed God’s divorce laws!"
Me: "He died from cancer. What do you mean you got rid of him?"
He: "Ten Thousand Men Praying!"
(I'm supposed to join the dots.)
Me: "I've no idea what you're talking about."
He: "Every day at the same time, ten thousand men pray to God for the same thing. We’ve been praying for Murphy's death and we got him!"
Me: "WTF! That's outrageous!"
He: (apparently not hearing my outrage) “We're going after Bob Hawke next!”

Now, thirty years on, we can safely claim that ten thousand men praying was not enough to knock off old Bob, ex ACTU President, ex Prime Minister, ex drunk and full-on larrikin, who is still going strong, enjoying his golden years with his lover and partner, Blanche d’Alpuget. However, when Bob does finally kick the bucket, despite, by my calculation, over one hundred million unsuccessful man/prayers for his early demise, the spiritual terrorists will claim credit.
Such is the nature of delusion.
Posted by Stafford Ray at 6:18 am