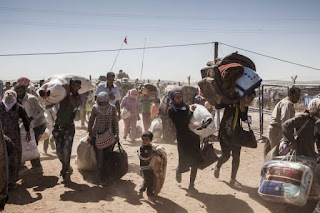 There cannot be one person in the connected world who was not moved by images of that toddler dead on the beach. However, I wonder if we can imagine similar toddlers (and women and men) killed and maimed by air strikes in Syria. Nobody imagines that bombing Syria will end ISIL barbarism, so I ask would the money we spend on bombs, planes and all that goes with that, be better spent on supporting Syrian (and Iraqi) refugees in Lebanon and Jordan?
Of course, that would not help the hate and scare mongers get elected and re-elected.
Posted by Stafford Ray at 6:24 am