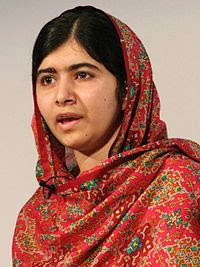 This is the picture I choose to illustrate my last post of the year. This young woman was on her way to school when she was shot in the head by men, who were so frightened of educated women, they were willing to murder a young girl to shut her up. She recovered enough to reveal to the rest of us exactly why we must educate girls. In all the bluster and bloodshed that is our world, she is a voice of reason and compassion. Let's hope her passion and message encourages more women to speak up.
This poem was written in an appeal to women, particularly Muslim women, who are over represented in groups that are currently in conflict between (mainly) men. Lysistrata was a mythical woman of Greece, a thousand years before Mohammed and two and a half thousand years before ISIL. The Taliban would have been terrified of her too.

Mothers of Islam,
virgins no more.
Prisoners of your own making.
Only you can set them free,
your children and your men.

I wish all my friends a happy holiday season.
Whatever religion you follow, or if you follow none, we are all Human Family and I love you.