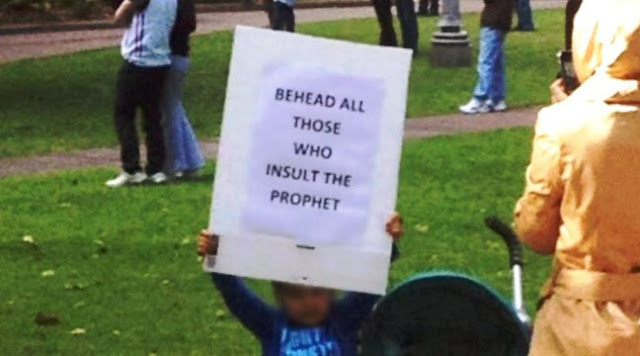 So, someone somewhere in the USA made a u-tube that reportedly, among other things, depicted Mohammed as a paedophile. History states that Aisha, his youngest but not his first or last wife was betrothed at age six, married at eight and, reportedly consummated when she was ten and he was fifty-three. His first marriage to Kahdija he made when he was twenty five and she forty.

That marriage was monogamous and lasted twenty-five years until her death, so up to that time there was no evidence of paedophilia, which, as any psychologist will tell you, is a mental illness that is difficult for the perpetrator to deny. Also there no evidence he was 'bedding' two women concurrently at any time, so we cannot safely draw the conclusion he married Aisha for sex. So if he was not a paedophile, why did he marry Aisha when she was so young?

Later in life, he did marry women with families who had lost husbands so there is evidence he married some women to give them and their children protection offered by married status, and of course there is politics. As in royal households of Europe and the landed gentry of Britain, marriages were arranged to create bonds between neighbours and it was no different with Arabic tribes of his time and in some societies, it still happens.

Marriages made allies, so was the marriage to Aisha a political marriage? Some historians have Mohammed already married to Sawda by then, a widow who came with her family and, as a grown woman, would have satisfied his sexual needs. He provided an apartment each for Sawda and Aisha, so they had private quarters. Although it was stated officially that the marriage to Aisha was consummated when she was ten, who really knows? If the marriage to Aisha was political, then of course Aisha’s family would be keen for consummation to be announced so they could be confident the union was 'official'.

So we are told he did consummate the marriage and we also know that he came to love Aisha deeply. She was his favourite and later, his historian. As for later marriages to widows with families, there could have been seven or eight of those. So the household became large and complex and who actually slept with the Prophet, only the Prophet and the women knew.

OK, so we come to now. Modern Western culture is very specific on age of consent and at what age we allow marriage, and we are unanimous in our condemnation of paedophilia. In our definition, sex with a girl of ten is paedophilia. But we cannot apply twentieth century morals to the sixth century, not can we be sure Mohammed did actually have sex with Aisha while she was a child. To assume he did, and also to assume it was unethical for him to have done so, as we say in law, is dangerous.

Then last week, an individual, an extremist Christian and a US citizen, made a flick and the Muslim world erupted, shooting people, smashing anything smashable, and calling for the death of anyone connected with the US. Even as far away as Sydney. Here, Muslims demonstrated and some youths rioted, putting about twenty people including half a dozen Riot Squad police in hospital. So what is the connection? Americans did not condone the film. Australians did not condone the film. In fact very few even knew it existed. But when they did, everyone from Obama, Clinton, all our political leaders down, condemned it as not representative of our attitude to Islam or the Prophet, but the riots happened anyway, killing innocents and even the US Ambassador to Lebanon, clearly a friend of Islam and a peacemaker.

So why him? Was his friendship with Muslims a threat to those who destabilise regimes to take advantage of chaos? Muslims in Australia seem to be so happy to be here, so was the Sydney riot an aberration? Ockham’s Razor says not. Such a violent reaction to what was a grubby little film that could in no way be blamed on any one here speaks of a wider discontent, particularly among Muslim youth, and our governments seem to be ignorant of the source. Try these for size.

• Our (secular) parliament starts each session with a Christian prayer.
• Witnesses in our courts, supposedly secular and blind to religion, race and gender, are asked to swear to tell the truth with a hand on a bible, ‘so help me God’. We are permitted to make an alternative affirmation and not use the Bible, but the Bible is still the default oath and is expected.
• Funding is provided for Public (secular) Schools to have Christian chaplains. They say the school can choose, but originally, the funding was specifically granted for Christian chaplains sourced from one Christian organisation, in a bid to attract the Christian vote. Unfortunately, there are more votes lost when something is taken away than when something is promised, so it stays.
• Services (defence, fire brigades, police etc) fund Christian chaplains.

At a local level, communities more often than not, resist the building of mosques in their neighbourhoods. A proposed Christian church is generally welcomed.

In other words, we are a Christian country in which minorities such as Muslims feel alienated. It might not seem that important to 'old Australians', who are accustomed to the flow of language with constant references to Christian beliefs, but one must remember that, unlike most Christians who might or might not attend church once a week or maybe Easter and Christmas or maybe only for funerals, Muslims are infinitely more enmeshed with their rituals, prayers, customs and dress codes.

They do notice and they resent it. Now having said all that, I have no doubt our Christian trappings are used as evidence of religious oppression by many Muslim leaders to keep the cultural divide in place. And with that attitude embedded, it does not take much of an excuse for young angry men to make up a mindless mob of destruction of anything representing the ‘other’.

It might be time to remove religious references from our public institutions, and that can only be done if the majority wants it to happen. But in no case does mindless thuggery like we saw a few days ago, inflicted on a bemused population lead them to believe the minority in their midst is non-threatening. A minority that wants to be equal needs to join in the political process to present its case in the political arena, and it certainly has one. But attacking existing and emerging allies in the general community is not a smart way to go and Muslims here must talk about that among themselves. The majority must also realise that in the long term, it is vital that our newcomers, no matter the source, should be encouraged to feel 'Australian' first and Christian, Muslim, Hindu second. If we fail at integration, we will create the type of bloody mess these people came here to escape.