Rudd destroys his party, but why?

Australians are intrigued by the sudden resignation of their Foreign Minister. He won a clear victory in the 2007 election to become Prime Minister but was unable get his promised reforms passed.

He wanted so much to be the Green Messiah and take the image of a clean green Australia to Copenhagen. He signed Kyoto but his negotiations with Conservative Leader Turnbull we so soft on polluters that his fatally watered down bill was not supported by the Greens. On the other side of politics, Turnbull, by recognising the need for action on climate change was seen as a turncoat by his natural constituency, Big Business and was replaced by Abbott, the archetype Right Wing denier (and femophobe) who has since taken hate mongering to new lows.

When Rudd returned from Copenhagen to bad polls, he had a temper tantrum and turned his back on Climate Change reform, shocking his supporters and driving the polls even lower.
His cabinet colleagues were unhappy with his autocratic style and blamed his failure to secure climate change legislation, a mining rental tax and health care reform on his inability to negotiate, so he was replaced as Prime Minister by his deputy Julia Gillard who was known to be a team player. 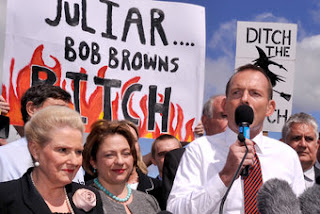 Gillard has since suffered unprecedented vilification by Abbott who is desperate to depict her as incompetent by blocking any legislation that might solve those nagging problems like refugees arriving by boat, he falsely claims is a breach of border security and a major illegal immigrant problem. In fact they are all intercepted so there is no security breach and they are relatively few compared to those who arrive by plane, papers in order and money in the bank, clearly not desperate refugees. 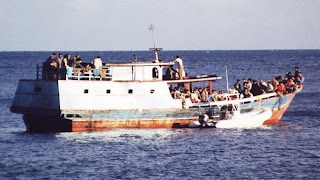 I have been concerned about the effects of climate change for at least thirty years. As soon as I became aware that CO2 concentration was rising towards double its historic level, I said; “We can’t have a change of this magnitude and not have knock-on effects.” I was right, but back then I expected that wisdom to be so self-evident the whole world would take action immediately as happened when CFC’s were shown to be destroying the ozone layer.

But back to Rudd. I have no doubt he is trying to force his party to re-elect him as Prime Minister because he thinks he can turn around the party’s popularity as he did in 2007, but he is deluded.
Image trumped ability then but he was a failure as Prime Minister. On the day before his resignation, I said to IXL.’ What Rudd needs to do is say he totally supports Gillard, agrees she is the best person for the job and he will not be challenging her.’ That would have swung his supporters behind her and the next election would have been winnable, and more to the point, Labor’s reform agenda would have been secured. 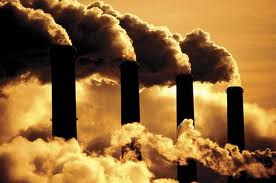 Thanks to Gillard and her ability to work with her own cabinet and maintain the support of Independents and Greens, that agenda has essentially been achieved although on the way she handed Abbott the whip he has wielded ever since, insisting she is a liar. We can nit-pick and harp on her election promise not introduce a carbon tax and maybe we should quote John Howard who introduced the concept of the ‘non-core’ promise, but she was committed to a carbon trading scheme so the temporary imposition of the tax, although it has a bureaucratic (and political) cost, will start the move we must make to a nil-carbon economy. However, if an election is called before the positive results of those reforms can be demonstrated, they will be scrapped by Abbott and we will again join the US as the only two developed nations where climate change scientists are dismissed as alarmist and Big Businesses dictates public policy on climate change.

My prediction:
Rudd will lose and in a third pivotal hissy fit, will resign his seat. There will be a by-election that Labor will lose. Abbott will try his damndest to woo Peter Slipper back from the Speaker’s chair and force Labor’s Craig Thompson, the man suspected of having a grotty past, to resign. Either way, Gillard is unlikely to survive until the next election and will lose government to a leader who has no policies except that he promises to undo all Labor’s reforms. He is selling the concept that government by a party that has a set ideology that economic growth is sacred no matter what the long term cost and believes the Market will fix everything is preferable to one that governs by negotiation and consensus. 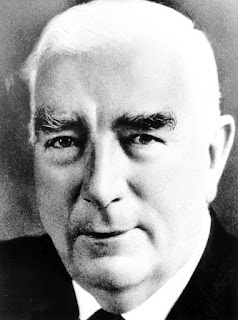 Abbott will quickly move to a double dissolution to break the Greens’ control of the Senate and Bob Menzies' Lucky Country will again feel secure that Daddy is in charge and we can go on living the good life, ignoring the fact we are the World’s Worst Per-capita Polluters, letting everyone else do the hard yards while we bask in temporary wealth of our China-driven mining boom.
Posted by Stafford Ray at 4:08 pm