Sign of the times.
First the entree.
Like a cheap boat? This one came in a few months ago after it was surrendered to the bank. She will go at a fraction of her replacement value and a bargain for anyone wanting a really big luxury American built cruiser.
The main story. 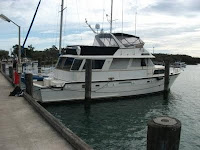 While handing out voting information during our recent Federal election I was accosted by an angry forty-something woman.
‘I’d vote Green but you won’t let me fish!’, she snarled at me, in a not-to-be-questioned statement. Our Green Party does have scientifically recommended policies to create more marine parks where species can survive to keep recreational and professional fisheries sustainable.


The level of debate here can be judged by a bumper sticker on a fisherman’s car that says “Fix the environment-shoot a Greenie”.
To illustrate depletion of fisheries I describe observations made in two fishing ports, Eden in New South Wales and Mooloolaba Queensland. 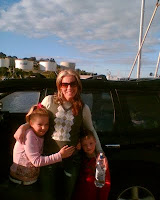 Eden in the 1960’s was a bustling international fishing port. I saw huge trawlers and ‘mother ships’, refuelling from one of four million litre tanks above the wharves across the bay from a substantial fish cannery, the biggest employer in the town. You can see the tanks over the bay behind my youngest with kids in about 2008. Empty, and a reminder of happier times.
When I was there three years ago, the cannery was gone, its long wooden wharf festooned with danger signs. For sale signs stakes out landscaped vacant land where the giant fuel tanks once stood. The three remaining working trawlers, tiny by comparison, were serviced from a road tanker filled from one of the two town gas stations. 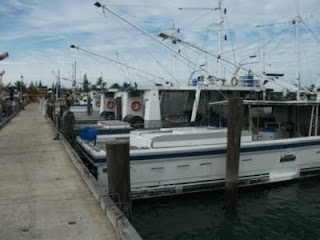 Here in Mooloolaba, four of the largest trawlers have been tied up for two months, the crew gone, looking increasingly forlorn. Yesterday I asked and was told the ‘company’s broke’. That represents about a quarter of the current working fleet. Further questions revealed that those four were what was left of eight the company worked only two years ago. That business failed because the fisheries are no longer sustainable at even the current reduced level of activity.
So what should be done? Around here there is no doubt. Open marine parks to commercial fishing and/or shoot a Greenie. Although everyone here knows the truth, it is convenient to blame someone for their predicament and it seems there are plenty of populist politicians who pop up to direct the anger at their political opponents. It is rare a politician in opposition is forced to deliver so their rhetoric produces two unfortunate outcomes. They give people false hope, delaying their departure from dying industries and sometimes their rhetoric leads to frustration fuelled violence. 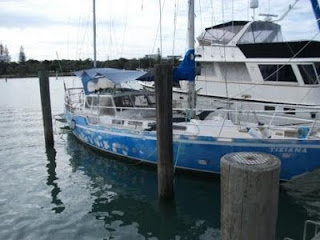 Meanwhile I am gertting on with curing my lovely old Tiziana of the measles. As you can see she has a serious case of the 'patches'.
Posted by Stafford Ray at 12:31 pm