Calling all carers. Did you know that about 75% of carers suffer depression within two years? Of course you did (if you've been there)!
My old mum died on my birthday last year at 93 after suffering a severe stroke two years earlier that left her mind in perfect condition but her body useless.

To stay sane, I wrote poems and stories and was partially successful.... at remaining sane, that is. I don't invite second opinions about my sanity, but do invite you to share your carer stories with me and each other. Meanwhile, to kick it off, you might find my stories and poems interesting. If so, please give encouragement, if not shut up! :-)
This is her story of Marjorie, her stroke and her carers. She was a local, living in Atkinson Rd Nambour for many years, helping out at Bli Bli primary school around 1967-72.
Marjorie before her stroke surrounded by grandchildren.

Whatever convinced Mum that she would rather live, I will never know and I suspect, neither will she. Whatever it was, she agreed to let the doctor re-insert the cannula and thread a plastic tube through her nose so she could be fed. She knew what was in store for her but agreed anyway. I guess women are more used to having other people, usually men, prod and poke their private bits and pieces, in one way or another from an early age. 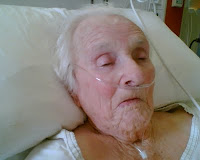 Be that as it may, she did decide to live and of course, that is the test. If they want to live, we are bound to support that decision regardless of the cost to the common weal in money and to loved ones in time. I don’t
know what I would have decided if I had been facing death after ten days of starvation following a serious stroke that left me with no control over my tongue, no swallow and no speech.
I remember a mate of mine interviewing a rather beaten up old bloke of eighty-five. He was complaining of his medical woes, bent over with arthritis, sans teeth, sans hair and apparently sans everything else. My mate Spike said he sympathised with the old fellow and remarked that he doubted if he himself would like to live to be eighty-five. The old fellow came back, quick as a whip.
“When you’re eighty-four you will!”

Well, with staph lurking in most hospitals and never enough spare beds to accommodate the average road smash, they push them out as soon as acute care is no longer essential. For Mum, that meant Bega. Bega has a lovely caring home for older citizens requiring twenty four hour care, but it is so far from Mum’s home in Eden that she would be unlikely to be visited regularly once the guilt rush was past and all her busy offspring and friends had returned to their already over-committed lives.

We decided that Mum could be cared for at my sister Jennifer’s house. Of course, there would be professional help, a nurse to bathe her most days, a speech therapist three times a week, a physiotherapist twice a week and a little cleaning help if required. It all sounds wonderful, but take an hour a day out for the professionals and that still leaves twenty three, seven days a week and no prospect that the outcome will be anything to celebrate in the long run. We are dealing with a ninety two year old person who has already suffered one stroke eleven years before and is, notwithstanding her survival of the latest treachery visited upon her by her ageing body, on the skids.

To be continued?
Posted by Stafford Ray at 2:10 pm